Peyton Manning was released by the Indianapolis Colts after being their starting quarterback since 1998. Peyton’s injured neck prevented him from playing during all of his last season with Indianapolis.

Peyton chose to risk it all and signed with the Denver Broncos, where he just finished a remarkable season, setting all sorts of records and taking Denver to the Super Bowl. But Peyton and Denver lost the Super Bowl.

What Does Peyton Do Next? 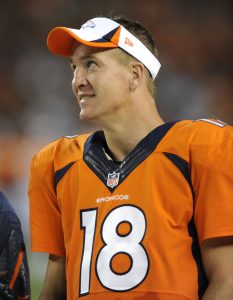 Peyton has reached the crossroads every professional athlete faces. He must decide whether to continue playing at a probable diminished capacity, and with greater personal risk, due to a neck injury, or to move on to another life altogether with a different work position.

Does Peyton choose to return to play for Denver and finish what he and Denver started by winning the super bowl, or does he retire to a new life? Peyton devoted his entire life to being the best football player he can be, and suddenly faces the scary uncertainties of life after playing football.

This is the perfect time for Peyton to consider engaging his own career coach.

Peyton’s career coach will assist him to discover and get his NEW “ideal income position.” He will be able to convert his drive to win, his intense focus to detail, his sense of playfulness, and his quick mind into his new career that will be more fun, more prosperous and more rewarding than he thinks is possible from his present vantage point.

His coach will open up worlds within him that he never knew was there because he never looked. If he can succeed at one of the most demanding positions in all of sports, he will succeed at whatever else he is passionate about and has the talent to perform.

The key for Peyton is that he discovers his ideally matched new career path His new career allows him to fulfill his newly discovered passions, talents, and priorities on his terms, now and completely, so he does not waste his time, money, and pride in trying numerous careers and failing.

With his career coach, Peyton will take back full control of his life. He will be able to create his new world that best suits him, that might include playing, coaching or broadcasting football, if he wishes. More importantly, he will KNOW and Control his next life after playing quarterback.